Coverham Dairy and the Walls family

One of the contacts we made at the Middleham & Dales Local History Group talk last week, Valerie Slater, has now sent us a brilliant set of family photographs especially ones to do with Coverham Dairy. She writes:

“Have just sent you a photo of grandma at Coverham Dairy…[it] shows staff and visitors at Coverham Dairy c. 1920. My grandmother, Annie Mary Horner, is front right next to her friend Mary Hogg. 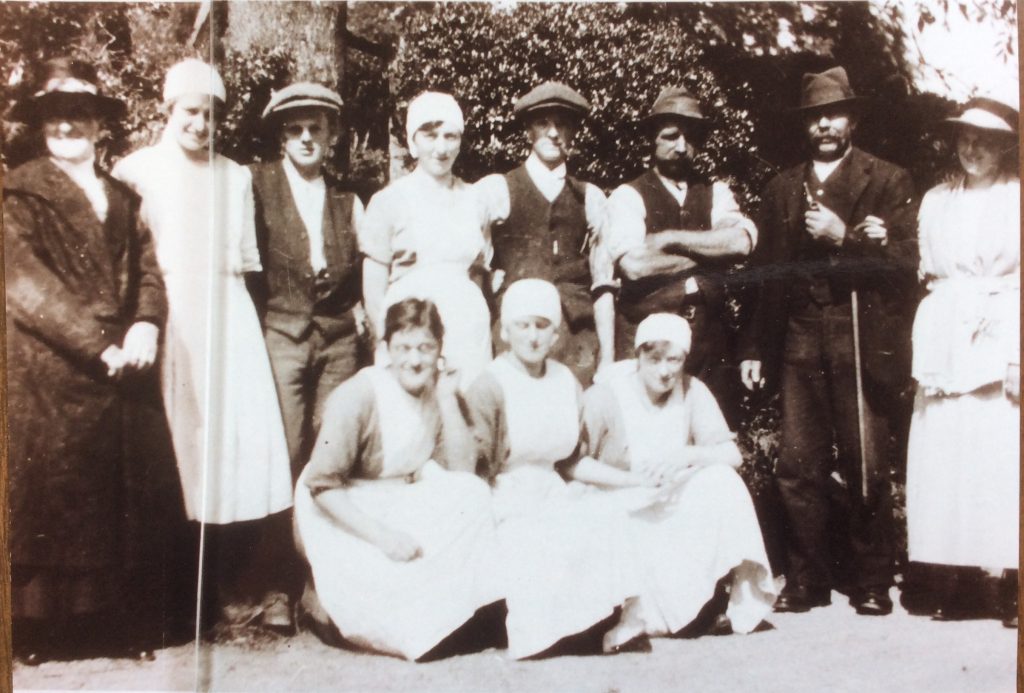 “My grandparents didn’t start dairy farming until 1937 when they were able to buy land around their house in Carlton. They had a new cow house built – I think it had six stalls. My grandad [Richard Walls] or grandmother did the milking (grandad also worked at Fleensop for some of the time) and after my mother [Eva Walls] left school in 1939 she delivered milk to various houses in the village. 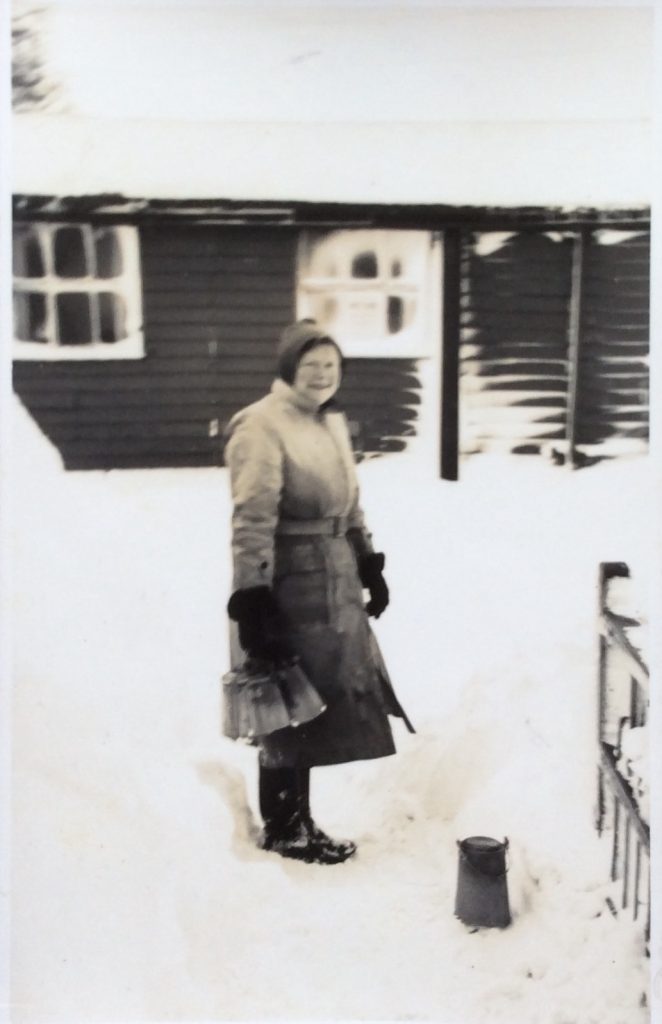 Eva Walls delivering cans of milk in Carlton, Coverdale, she is standing in front of the village institute. Possibly winter of 1947. Courtesy of Valerie Slater

When mum’s brother Leslie left school in 1940 he started work at Coverham Dairy. 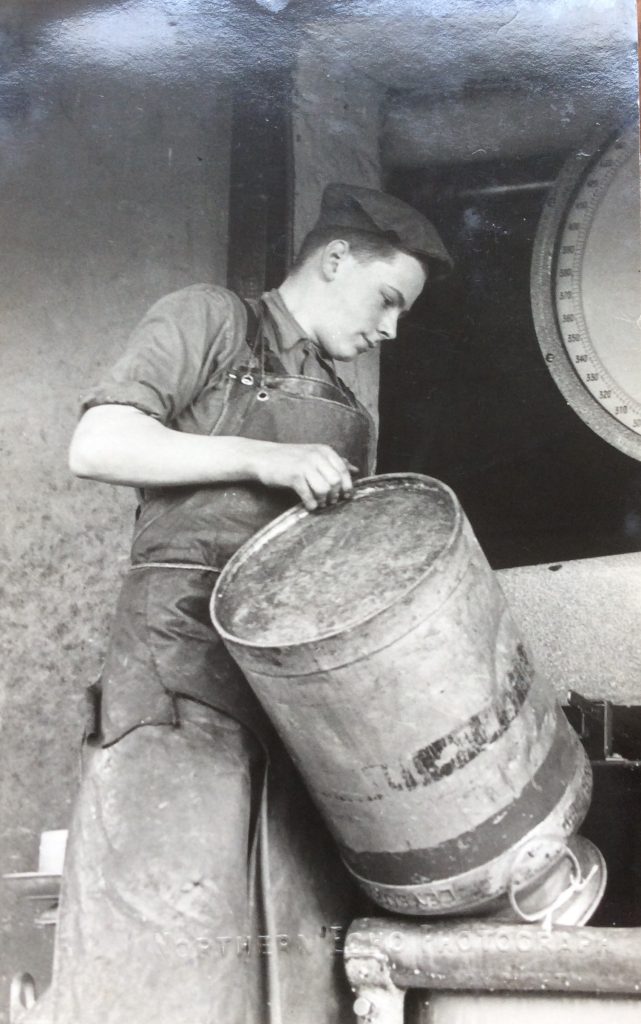 Richard’s father George was born at the Foresters’ Arms in Carlton where his father William was Inn keeper and farmer. George spent many years in Birkenhead running a butcher’s business – no doubt there were cow keepers
nearby. 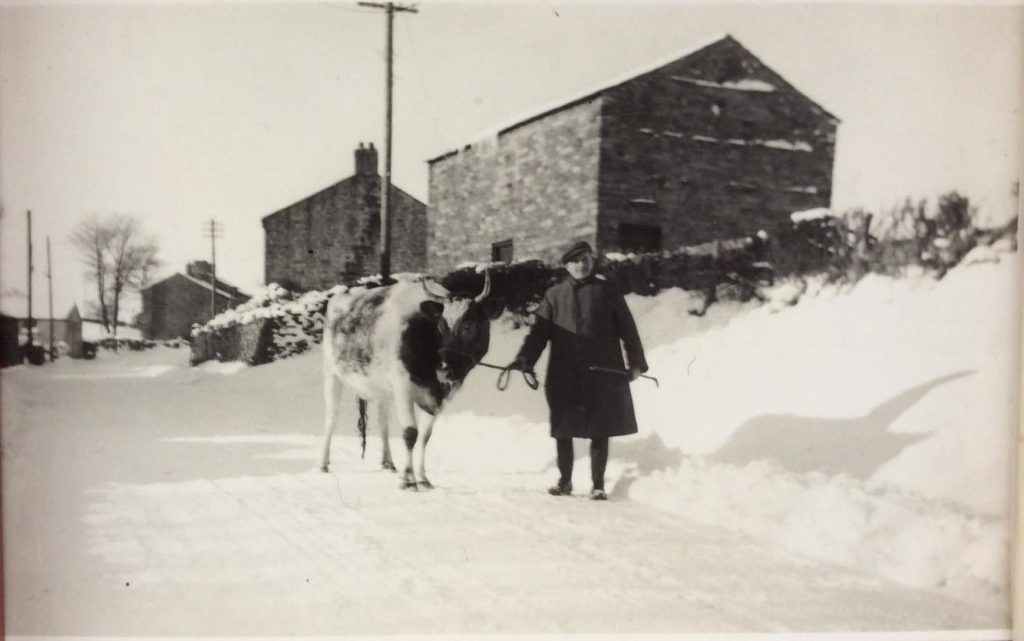 William’s wife, Ann Coates, was the granddaughter of Tristram Hogg of West Scrafton. As far as I can ascertain, all the Liverpool cow keepers called Hogg were descended from this Tristram.”
Valerie Slater (pers comm)

Valerie adds “Robert was the son of John Hogg ( and Jane Ascough) who in turn was the son of Tristram Hogg of West Scrafton d.1832. John Hogg’s sister Ann ( Tristram’s daughter) married Joseph Coates – I am descended from two of their daughters leading into the Walls and Law families.”