We have been reading a 1941 version of an early seventeenth century survey of the ‘Manor of Wensleydale’ with great interest. It has been republished by Cambridge University Press (2014). 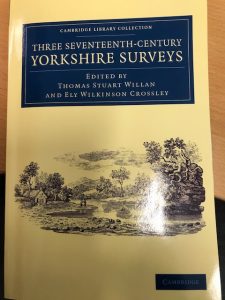 Sadly the map that once went with it has been lost but it still paints a fascinating picture of the importance of cows to the tenant farmers at that time.

The area covered was that once owned by Fors Abbey in the ancient Forest of Wensleydale, north of the River Ure. It became the Manors, then townships of High and Low Abbotside from the eighteenth century.
The first thing that really stands out is the number of ‘cattlegates’, nearly every tenant has them.  There are 119 farmholdings listed with just under 668 individual cattlegates overall. Each cattle or beastgate represents the right to graze one cow on the common pastures of the manor. For example, this is a tenant at Skelgill:
“The widdow of Luke Thwaite holdeth one Dwelling house lately erected with a barne a stable a Turfehouse and garden adjoining…whereunto are belonginge & adioyninge 4 parcells of meddow ground lyinge together [c15 acres]…There is also belonginge to the said Tenemente 8 cattlegates att ijs vjd the gate in the pasture called the Coate Moore…Item 2 Cattlegats in the Pasture called the little Fell Meawes att xviijd the gate.”
Thomas Stuart Willan & Ely Wilkinson Crossley (eds) (2014) ‘Three Seventeenth Century Yorkshire Surveys’ p12
So, widow Thwaite could graze 10 cows on the common summer pastures and had 15 acres of meadow land to grow hay on to feed them over the winter.
She has a barn near her house so we must presume that is where at least some of her cows were overwintered. 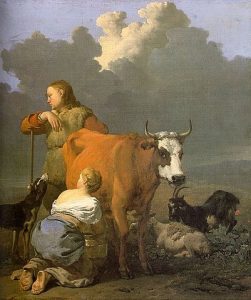 Other tenants are listed as having cattle barns out in the fields – known as ‘feild houses’ in the survey. For example, a tenant at Forsdale, Charles Atkinson has a dwelling and ten parcels of land (c193 acres in all), two of which are noted as ‘with a feild house thereupon.’  ibid p50
Such field houses or barns  used to overwinter cattle had become quite numerous by the eighteenth century. Richard Pococke visited Wensleydale in May 1751. From Hardaw he climbed up onto the fells above Cotterdale and admired the view back into Wensleydale. He described it thus :
“The prospect from the height of Cotter is the most awful and grand I ever beheld. The mountain all around…and the valley beneath, which tho’ it is much narrower to the west of Ascrig, yet it is still a fine vale of good pasturage, and, what is most uncommon, there are houses built in most of the fields, which is an unusual prospect, and at a distance make the appearance of scatter’d village.”
Richard Pococke (1888) ‘Travels through England’  p187
These ‘houses’ he describes are the field barns we can still see today though now mostly redundant. They once held both cows and the hay to feed them with over the long winter months. However, there is evidence of an earlier practice of storing hay in open air stacks on raised stone platforms called stackgarths in the 1614 survey. Both examples come from the remote settlement of Lunds, up in Garsdale: “Henry Shawe holdeth one Dwellinge house with a stakegarthe, a Turfehouse & 2 gardein plotts adjoining…” (ibid p61); William Parkin holdeth one Dwelling house with a yarde a garden a Turfehouse, & a feildhouse with a stake garth thereunto adioyninge neere unto the Dwellinge house aforsaid…” (ibid p62).
We are hoping to do some research on the use and presence of stackgarths in the archaeological record in Wensleydale, so this gives us a great starting point and dating evidence too.
If any  more evidence were needed for the importance of cows in the local economy we can also look to the number of fields in the Manor of Wensleydale with names such as ‘Little Cow close’; ‘Calfe parocke [paddock?]’ and ‘Cowes garth.’