There are many beautiful things in the wonderful town of Grassington such as the River Wharfe or the amazing Grass Wood. But today I wasn’t here to visit any of those places. I was here for a young ranger session to make bird boxes and learn about bird ringing. It was a very bright sunny day. As I arrived at the National Park Centre, I could already hear the twittering of birdsong coming from the trees and I got more excited.

We started with Ian and Mark, the two bird ringers explaining their work. Bird ringing is the process of attaching a tag to the leg of a bird with an individual identification number. The age, gender, species and wing size is then noted down. During this process the bird is unharmed. The ring itself is very light so it doesn’t disrupt the bird’s flight. All the information collected is sent to the British Trust for Ornithology (BTO). This information helps track the movements and the life span of the tagged birds.

Next, Mark demonstrated the process of ringing a bird. A few cotton drawstring bags were hanging from a pole next to his leg, and some of them were moving. Ian explained that these were the bags that the birds were transported in from the mist nets. Mist nets were very thin mesh nets that had little shelves that birds could fall into as they flew to the bird feeder behind it. The mist nets were usually set up between two poles. Most birds are caught in the early hours of the day as that is when they are most active. Birds as large as buzzards and other raptors could be ringed. Ian and Mark had once ringed mute swans.

Mark reached into one of the cotton bags and carefully drew out a beautiful green bird. It seemed tiny compared to his hand. He took a miniscule ring from a cord and attached it to the bird’s leg using a pair of special pliers so that it could slide up and down the leg and wasn’t pinching the bird. Next he took a small ruler and measured the bird’s wing. Mark told us that the bird was a greenfinch and that it was a female. One of the signs of its gender was that it was a slightly darker shade of green than the male greenfinch. Its age could be determined from the texture and shape of the tail feathers and the consistency of colour on the greater coverts which are the second layer of feathers on the wing. This particular greenfinch was born last year as the colour of the greater coverts was inconsistent and not the same all the way across the wing.

As Ian wrote down the information Mark opened his hands to release the greenfinch. At first it did not move and just sat in his hands but then in a flash of green it shot away into a nearby tree. The next greenfinch was also born last year but it was a much brighter colour which denoted that it was a male. This bird was a lot more cheeky and would try to trick Mark by suddenly bursting into life and when it was released it shot away like a bullet and made a wide circle above us before flying away.

After this exciting session we went to the workshop to make bird boxes. Cat explained that we would be making bird boxes for sparrows and that there would be two sides, a front, a back, a base and a roof on a rubber hinge. We would cut the pieces and mark holes for the screws and then Cat or Rachel would drill the holes. I paired up with Tom and we immediately got to work cutting the pieces. We used a ruler to make the measurements and when we started cutting it went smoothly until we hit a knot. We struggled to free the saw for some time but it remained stuck. When we eventually managed to free the saw and get back to work we again ran into the same knot which was very exasperating.

We decided to take a break and went to look at the bird Ian and Mark had caught. It was a beautiful vibrant blue tit. Up close the colour was amazing. I had never really noticed how bright it was. Eventually we managed to cut the wood and then we marked the holes for the drill. It took us a while but we got there eventually and we were finally able to sit down for a well-earned lunch. After lunch we went to see the mist nets. The garden where the mist nets were positioned was alive with birdsong and I could also see little shadows darting about. The mist nets were positioned next to a small tree and a clump of bushes. They were attached to two poles with a bird feeder behind them and when the sun shone on the net it became virtually invisible. I could see how easy it would be for a bird to fall into the shelves of the net when flying towards the bird feeder.

Mark demonstrated how the bird wouldn’t get hurt in the net because the shelves were like a bed and the mesh was too small to allow the bird to get entangled. Later, Cat showed us a beautiful bird nest that had been found abandoned. It was made from moss and branches and was so tightly wound that it felt solid. Finally, we gathered around Ian and Mark to see the last few birds ringed. Mark pulled out the first bird which was a startlingly beautiful goldfinch. Its head was a beautiful shade of red and it had a vibrant yellow on its wings. Ian explained how some birds’ beaks are specially designed for different foods. Some are seed eaters and some like reaching into spiky bushes to pick berries. Next there was a dunnock. A bird with an amazing song and finally there was a pair of house sparrows, one male and one female. Mark told us how eye colour can play a huge factor in identifying the gender of a bird. In some cases, the specific shade of colour of a bird’s eye is the feature that allows identification.

The last three birds seemed determined to give us a proper send off. When the dunnock was released it remained docile for a few seconds and then flew straight at me! I barely had time to duck as it flew just over my head. The male sparrow shot straight into the group of people narrowly missing a few heads and the final sparrow, in a show of bravado, turned and flew straight at Mark who just about managed to get out of the way. On that eventful note, we all grabbed our bags and headed home and I was left reflecting on a fascinating day that ended with a rather cheeky dunnock trying to take my head off.

Want to find out more?

If you would like to come along to any of the meetings, please get in touch with Catherine Kemp, Education & Events Manager, on learning@yorkshiredales.org.uk or 01756 75164. You can follow the Dales Young Rangers on Facebook

The North and West Young Rangers groups are funded by BIG Lottery Fund through the Green Futures partnership programme led by Yorkshire Dales Millennium Trust. Green Futures aims to empower and support young people in the Yorkshire Dales and the surrounding area to become more involved, aware and connected to the fantastic natural environment that’s right on their doorstep.

Green Futures is part of Our Bright Future, a £33 million programme funded by the Big Lottery Fund and run by a consortium of eight organisations which is led by The Wildlife Trusts. Our Bright Future aims to tackle three big challenges facing society today – a lack of social cohesion, a lack of opportunities for young people and vulnerability to climate change.

The Young Rangers group based in the South of the National Park is being part-funded through Stories in Stone. Stories in Stone is an ambitious four-year programme of conservation and community projects concentrated on the Ingleborough area developed by the Ingleborough Dales Landscape Partnership. The scheme is led by Yorkshire Dales Millennium Trust and supported by the Heritage Lottery Fund. 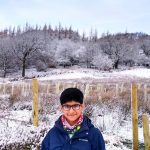 Muhammed is a Dales Young Ranger

Muhammed is a Dales Young Ranger