An Introduction To Hay Making

During the Covid-19 pandemic we decided to produce a few short videos to showcase the work our farmers undertake whatever the circumstances, and how that contributes to the stunning landscape we love in the Yorkshire Dales National Park.

Neil Heseltine kindly provided us with some footage of this year’s hay time which he and his family filmed on their mobile phones. Take a look.

The make-up of hay meadows

Traditional, species-rich hay meadows like Neil’s are becoming increasingly rare in the UK.

Made up of species such as yellow rattle, knapweed and sweet vernal grass, though the range of species varies depending on factors such as altitude and underlying rock and soil types. They are vitally important to a wide suite of wildlife including insects and birds; as well as providing a winter feed source for sheep and cattle.

But they are very much a managed habitat. Species rich hay meadows occur on land that is relatively nutrient-poor and that has not been intensively managed, which means it hasn’t been ploughed and re-seeded or received fertiliser. Land can be reverted back to a species-rich meadow but it takes a long time. Traditional species-rich hay meadows generally produce much less hay by volume than more intensively managed fields.

In the past, hay making would be a true family affair, and when farms used to have more staff working to help, hay making in the traditional way would be a big part of the farming year. But these days, many of our Dales farms are run by one farmer with help of their family, usually around their other jobs, and so manpower is missing. Coupled with our challenging British summers it can be hard to commit to making hay.

Hay requires a run of good weather, the ground needs time to dry out to support the tractor and machinery; the grass is mowed and then turned over (or scaled out), usually a couple of times, to dry the grass out. This turning also enables the seed from the flowers to drop to the ground and encourages the species to grow again the following year.

The grass is then rowed up into lines for the baler to follow. Hay can be made in either the traditional small bales, as Neil has done, or it can be made in big bales too. Hay must be left outside to cool down as it can risk setting on fire after baling. It is then brought inside to store until it is needed in the winter months. So this is why it needs a good run of weather.

Our weather is usually unpredictable and it’s not often we get good enough weather to make hay! Some years it is just not possible, and so the silage is made instead, which doesn’t require as long a drying time and is wrapped up, which preserves the grass.

After the bales are gathered in, livestock are allowed into the fields to graze down the unmown areas. The livestock also act as gardeners by treading in the wildflower seed from the hay crop, the seeds then germinate in the following years which maintains the “richness” of the meadow.

Traditional hay meadows are a key habitat to conserve under the government’s agri-environment schemes. These schemes support the farmers actions by paying a grant to contribute towards the cost of producing and managing the hay meadows. 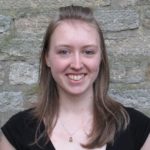 Briony is a Farm Conservation Advisor

Briony is a Farm Conservation Advisor