We are lucky to have a complete run of the nineteenth century ‘Wensleydale Advertiser’ newspaper at the Dales Countryside Museum. It had a short lifespan starting in 1844, reporting on a selection of local and national news as well as promoting its editor’s fairly forthright opinions on a wide range of subjects.

We’ve had a look through the run of stories from 1844 and have come across some fascinating detail about dairying in the dale. In the very first edition, the editor,  Fletcher Clarke of Gayle, makes reference to a pamphlet called ‘An Address to the Dairymen of Wensleydale’ asking for people’s opinions. We are lucky enough to have a copy of this pamphlet in our collections at the Dales Countryside Museum. A scan of the original 1843 document is inserted below if you’d like to print it out and read it in full. Its aim appears to be to stop farmhouse producers using the sort of unreliable middlemen he calls ‘higglers’ to sell their dairy products, particularly cheese. He also denigrates the growing practice of  “…making new milk cheeses after the Lancashire fashion, half new, half blue; or in other words, by skimming the cheese-kettle, and making from the same milk, butter and new-milk cheeses.” p6.

An Address to the Dairymen of Wensleydale

The author is called  ‘A Milksop’ but it is published by the Author who is listed underneath as Fletcher Clarke.

A few weeks after referring to it in his newspaper, he publishes a response:

“Two or three letters are received relative to the remarks we made in the first number respecting a pamphlet published some time back, entitled ‘An Address to the Dairymen of Wensleydale.’ They should have been noticed [i.e. published] prior to this date had their contents conveyed any practical information on the subject.

However, we find some pertinent remarks in one, as to the sale of Butter in the neighbourhood of Hawes. The writer states, and with reason, that we have no quality price for butter; but that the present system of collecting it, from house to house, and from farm to farm, is nothing less than a positive loss to those who manufacture a superior article. The farmer who offers a very excellent butter, which has cost much labour, and even skill to produce, receives not one half-penny more than his neighbour who has perhaps taken little or no care in its production or cleanliness of making.

There are several other minor evils mentioned attending this practice, and the letter concludes by earnestly soliciting the buyers to encourage its being brought to the market by the makers or owners, and there offered for public competition.”
The Wensleydale Advertiser 27th February 1844 no 5 vol 1

We know that Hawes had a huge market for butter sales in the second half of the nineteenth century, with  7000lbs of butter recorded as being sold in a single market day in 1878, though 3000lbs was a more usual amount. Marie Hartley & Joan Ingilby refer to it in their book ‘Life & Tradition in the Yorkshire Dales’ quoting evidence from Routh’s 1878 ‘Guide to Wensleydale.’

It seems that the newspaper editor’s advice was not heeded so he publishes a longer piece on the subject seven months later. The most extraordinary thing is his assertion that it is practically impossible for an ordinary person to secure a regular supply of milk and butter in Hawes in spite of being surrounded by the stuff.

“In our 5th number, will be found some remarks relative to the sale of Butter in the market of Hawes, and those remarks were accompanied with a promise that we would at some future period again revert to the subject.

During the interim we have watched with anxiety if the farmers and venders [sic] of this article, resident in the neighbourhood, would come forward and espouse a cause which would tend materially to benefit their own interests; but with that latent feeling of apathy, which characterizes the inhabitants of a secluded district, we find the usual custom (though plainly bad) perseveringly continued in.

It is not our wish to intrude on customs which are acceptable to a majority of our fellow-neighbours, and especially to those who are interested more closely in the sale of this article of commerce; but it is our duty as the conductors of The Advertiser occasionally to revert to subjects of public local interest, and to state fearlessly those opinions which experience teaches to be right.

The upper part of Wensleydale depends as regards its agricultural produce, principally on cheese and butter. The sale of these two commodities therefore are, or ought to be, the most material objects for the consideration of the producer. The market of Hawes has of late years formed, and we trust will continue so to do, the medium of sale for a great proportion of these productions, particularly the latter. More recently, however, we find that the attention and regularity of certain buyers, for the purposes of trade, have gradually introduced a custom, which acts with great detriment to the interests of the venders [sic]. But although this is the case we do not wish to say that the attendance of these parties has conferred no benefit on the market, but we wish respectfully to urge upon the attention of the farmers or sellers of butter the necessity of openly shewing their produce in the market, for public sale, instead of allowing it to be weekly collected as it is now.

Under the present system many solid arguments may be urged for a change; first, – the farmer has no power over the price of his own goods, being obliged to take whatever sum the buyer may state to be the current price for the week; secondly, – the method precludes all competition without which we have no healthy trade, but on the contrary mere monopolies; thirdly, – it renders it very difficult for those surrounding friends to obtain the article, even at better prices, and almost excludes any new competitor from the field of trade.

These are a few and only a few of the evils attendant on the present custom; and the sooner they are remedied the better; the easiest and simplest way may be effected by a union amongst the farmers and others to show their butter in the market, and to allow the best bidder to become the purchaser. Such a fact as that a contrary mode should be pursued seems almost too ridiculous to be continued in – yet it is so.

We have now done with this subject for the present, but we trust the parties interested will see the necessity of acting as we suggest, and they will we doubt not by so doing be very materially benefited. Extraordinary as it may appear it is nevertheless a well known fact that although abundance of butter and milk are produced in the neighbourhood, yet there is scarcely any place where the inhabitants are worse supplied with those very necessary articles, indeed it is almost impossible for a family to obtain any thing like a regular supply, and the poor man can rarely purchase a pound of good butter at any price.” 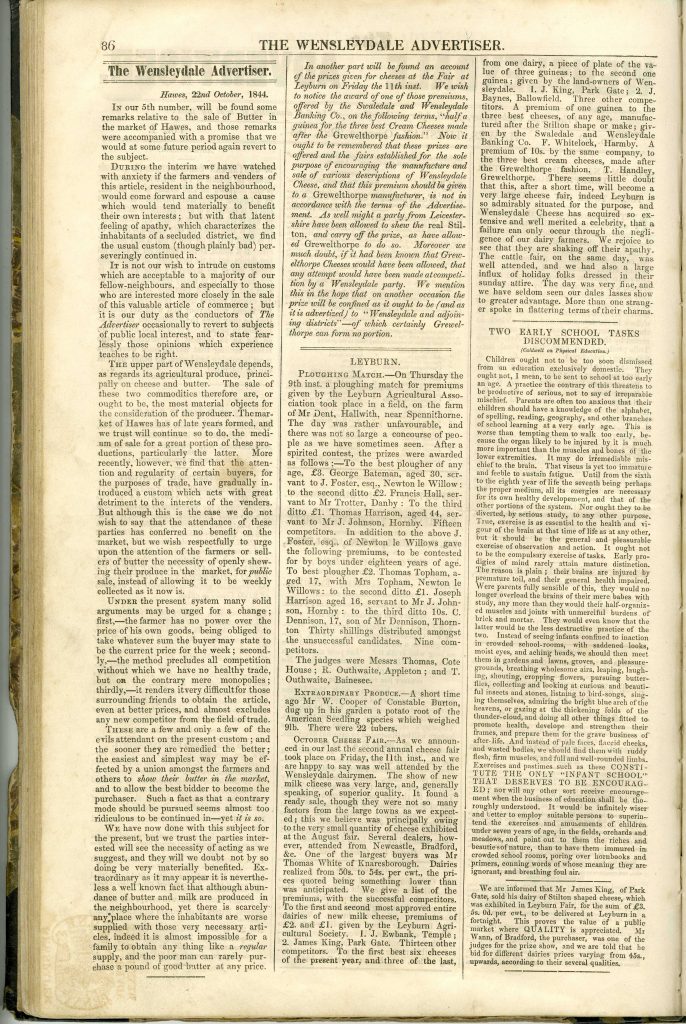 Having read these articles it’s interesting to refer back to our blog about Jane Elizabeth Thwaite’s 1895 farm accounts at Routengill where she was clearly selling cheese to both local individuals and wholesalers further afield but her butter seems to go to a single local wholesaler – Dairy Farm Account Books: Routengill Farm.